Notes/Highlights
Stumps learned to “tank” as the team managed to pull off one of the world’s longest Soulrender kills.

Notes/Highlights
The gang had a great month in the way of AotC and two new mythic bosses. Heading into mythic Ner’zhul will see the first real challenges of mythic content but it won’t be anything MS can’t handle.

Jake hasn’t met another Warrior with the Challenge Armor Set 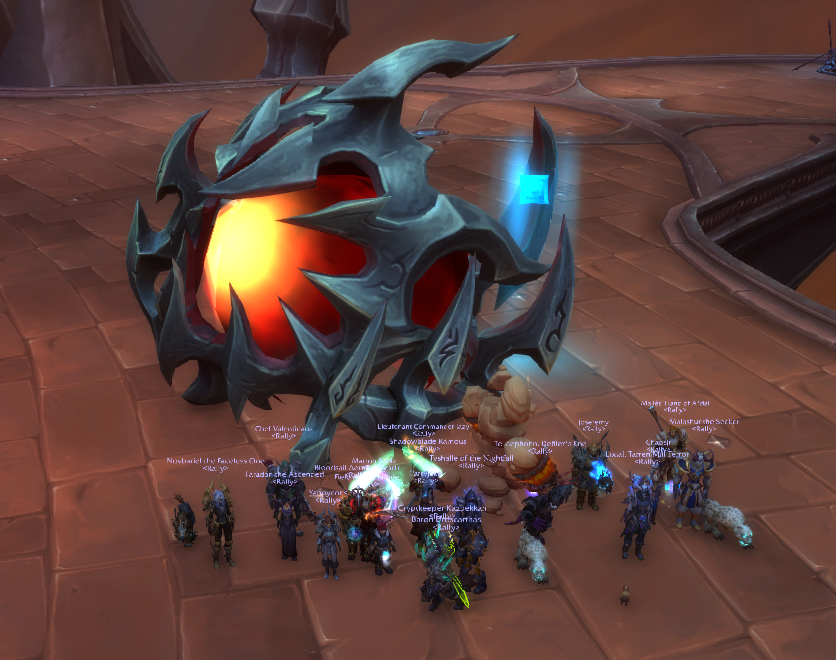 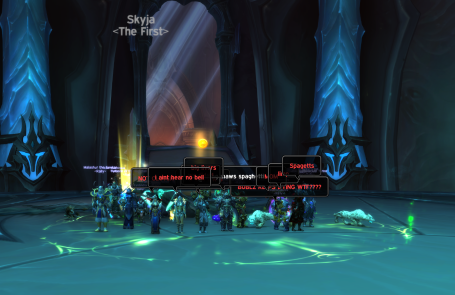 Zyn doesn’t know what tier it is:

Nov had too much time on her hand – and the raid successfully achieved BINGO on their last raid of the month: 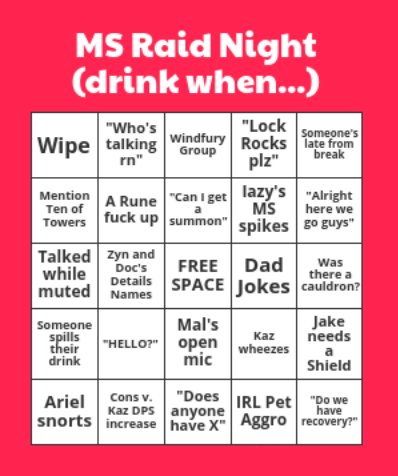 Notes/Highlights
BP welcomed many new members! Shpagettiyum as the team’s Guardian Druid, Compactwand as an additional cookie provider Warlock. Due to a shuffle in headcount, some of the usual healers decided to stretch their DPS legs and did some flexing! And lastly, Amyrael joined the BP Council! Welcome Amy! 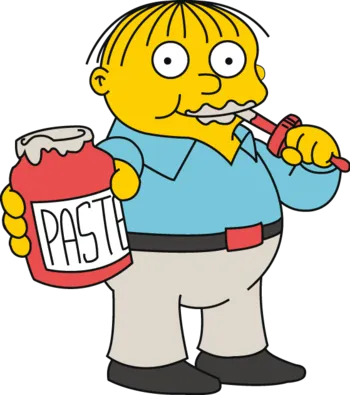 Notes/Highlights
Rally went back to the good ol’ days and completed Glory of the Legion Raider! Poor Maro missed an achievement but for the most part, everyone got to enjoy their red mooses!
Community Media 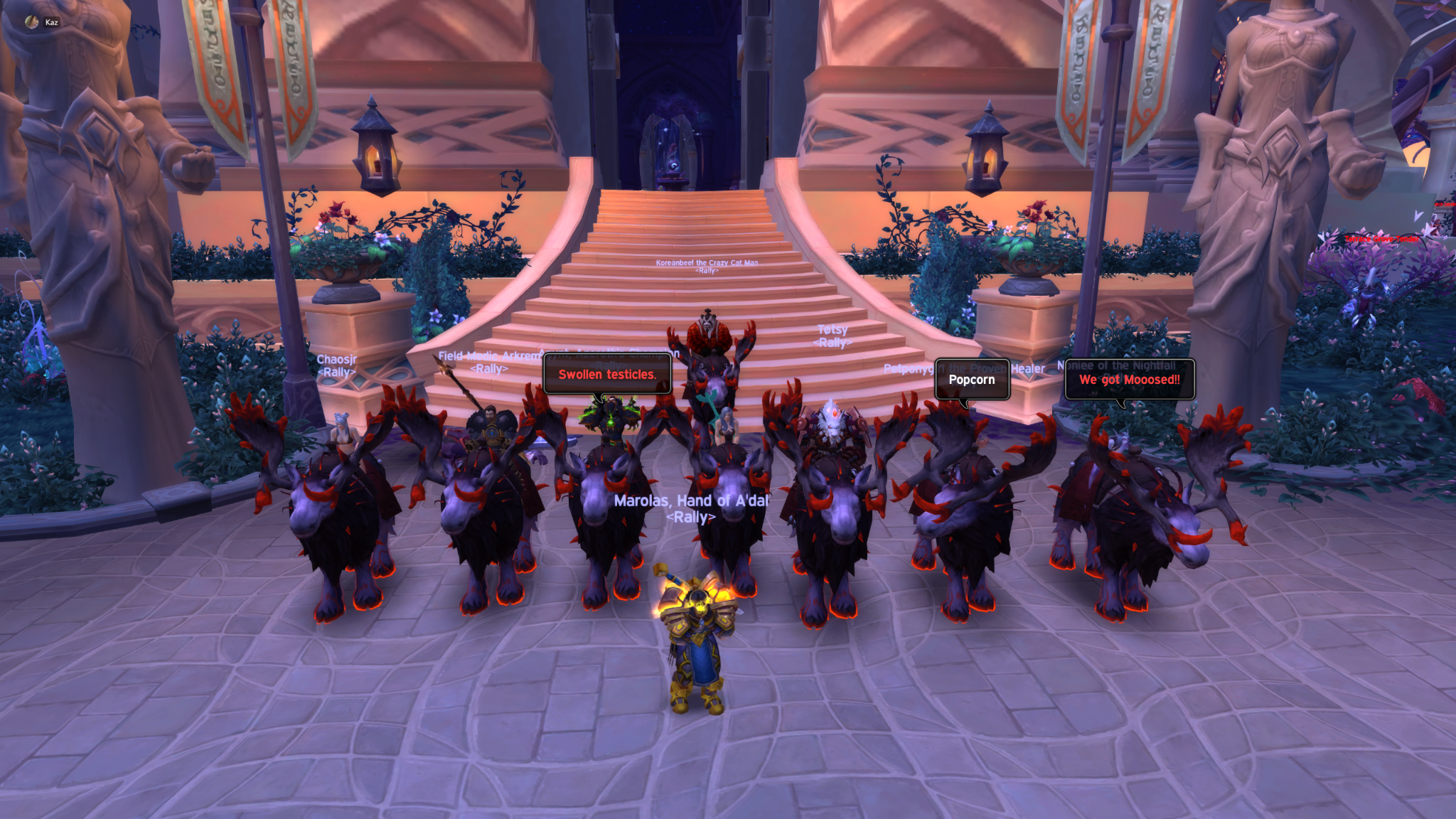 Notes/Highlights
OOF had a productive month getting AotC and the first four Mythic bosses down, and started their prog on Mythic Soulrender!

Notes/Highlights
MS got Heroic KT down and their first look at Mythic Terragrue and Eye, before tackling some heroic Reclears for much-needed Dom sockets to ensure AotC is just around the corner! They have yet to figure out how to NOT take scuffed kill screenshots, however.

Media
“Give me Wings, Bitch”

Notes/Highlights
BP kicked off the month with getting their Normal Sylvanas kill and knocking out the first four Heroic bosses! Soulrender awaits in September!

Notes/Highlights
Thank you to the gatherers and fishers of Rally for coming out on the 20th to help gather herbs and fish for the guild bank! Our bankers greatly appreciate every donation and we appreciate you taking the time to help out!

Notes/Highlights
OOF knocked out their first Mythic boss and chugged away at Fatescribe, AotC next month?

Notes/Highlights
MS knocked out the first seven Heroic bosses before dipping their feet in the Mythic difficulty, successfully downing Terragrue!

Beefy Pulls (BP) Notes/Highlights
This month BP successfully tackled the first seven normal bosses, and will continue progging on Fatescribe to get a look at KT!

Notes/Highlights
WTF had its last raid under its Castle Nathria name. They ran the first three in Mythic for fun with some alts. Closed out the Tier with some drinking games and banter!
WTF finished 8/10 Mythic, and will go into Sanctum of Domination as Osmer’s Obnoxious Friends (OOF).

One of many gifs from game night

Notes/Highlights
PTC was able to celebrate their final night in Nathria with a kill on Mythic Council of Blood, securing 7/10M on the tier. We also celebrate Nov and Lennather for serving on the council and for all the hard work they did for the team. PTC will go into Sanctum of Domination as Maw’s Spaghetti (MS). Tuesday Night Tendies (TNT)
TNT celebrated their post-AOTC nights with some casual reclears and fun shenanigans including achievement runs, and will go into Sanctum of Domination as Beefy Pulls (BP). Notes/Highlights
Rally achieved the Glory of the Hellfire Raider and got some neon green wolves to prove it! Thank you all who came out for the shenanigans!

Big party at the BFB house as the team killed SLG this month. As is tradition, the kill happened in a fantastically memey way with a scuffed roster. Highlights included Pam getting the kill in 10 pulls on his monk after progging the whole fight with his DH. Bly returned in heroic fashion to fill in a gap and sniped a kill. Maybe we should have all just taken a break for a couple months…The team also added a couple new folks (Numb and Boodles). Sire prog has been steady since the SLG kill and we are eyeing a May CE kill. O lawd please.

WTF got down and dirty this month and ended up snagging a Sludgefist kill to continue their solid prog pace. Now that the team has been freed up from its chains, the members are looking forward to seeing the next fresh hell boss in the line up, SLG. This team parties and hypes up raid hard with some sweet sweet jams every day. Huk the madlad has also added his streaming talents to the fold to team up with Byill in Rally’s Tue/Thr team streams. The dude has a hat with his name on it, the fuck else you want? As prog continues, so does the list of powerful team names for next tier, and we all know that’s the real reason any of us raid. Oh and Wes has been drafted for the council now…sorry gratz dude! Oh and then Skippy felt bad and decided to also volunteer for increased responsibilities :).

Guess what…these guys still suck at taking screenshots. Good thing they’re slappers and still killed Darkvein despite that. I mean, just look at that screenshot resolution. It’s like they’re in the TBC classic beta. Hot damn. Over the course of the month, the ‘taters stuck to their reclear guns and beefed up their weekly vaults. Along those same lines, they geared up their future Guardian tank as Nonie sniped an Ala’r trinket from Jake. Hah, get rekt idiot! They’re workin’ on slappin’ M Council this coming month.

Look at these absolute huge dick broskis. They finally put this hard ass tier in the rearview as the killed Heroic Sire for AOTC. On top of that, they’re slappin’ Sludge and SLG as one shots. Sire prog is tough to do on when you only raid once a week and have busy lives the rest of the time. Proud of these tendies as they continue their AOTC streak :). They’re now the only team that really gets to relax and have some fun until 9.1 hits. Enjoy it guys and gals!

Rally Achievement hunters got their first taste of SL raid achievements in the quest for Glory of the Nathria Raider. The achievements went very smoothly overall, shenanigans were had, and everyone got to show off their Rampart Screecher mounts on the stairs to the castle by the end of the night 🙂 Thanks to everyone for coming out!

BFB continues to chug along in progression. The team came into the month facing off against Sludgefist and managed to snag that kill using 2 MW healers (a WF based on public logs at the time). They had to bear down to overcome sporadic roster issues and are now 130+ pulls into M SLG prog. The team welcomed several new faces and geared up Middlebread despite several team members being predispositioned against carbs. Shout out to Manet’s VDH Shishroot who stepped in to Sludge while the bread was in the oven. SLG prog continues phase by phase now that the roster has settled into a more final form. Expecting big news on that front in April :). The team is currently extending the lockout to finish out the tier.

WTF soldiered on through the tier and made the decision to prioritize reclears to fill in gear gaps and keep things fresh. Nate and Ice were welcomed to the team as the Council prog continued through the month and finally culminated in a Council kill that was definitely and totally in March, yes. If you were looking to join up with a fan of Wu-Tang Clan, the Saga Continues, look no further than WTF’s own Reti. It’s been said he ain’t nothin’ to fuck with. During moments of brilliance, the team also began to consider charismatic Raid names for next tier. As we all know, picking the best raid team name is critical to success. Best Wishes to the team on Sludge prog! Expecting big things from these guys and gals.

This team is a lot better at killing bosses than they are at taking screenshots after killing those bosses (1 for 2 ayyy). Once again, the team proves that you can be successful on a one night schedule by securing Mythic Artificer and Sun-King kills. They’ll be setting their sights on Darkvein next and should be snagging that kill and getting into the meaty portion of this raid (Council+) soon. As always, this team has a lot of fun during raid as seen by the Twitch clips below. Should be a big month ahead for PTC!

The Kaz-Ari Feedback Loop
The Real Ghostbusters
Sharing is Caring

TNT continues to work through a tough heroic tier. Blizz really stepped up their game in Heroic Castle Nathria but that’s not slowing these guys down at all. After killing Sludgefist and SLG this month, the team is itching for a Sire kill. So far, the prog has been steady (Phase 2 at 53%) and lots of the team is putting in extra work to bring this thing home. 10 bosses is a lot to take care of for a one night team so they’re finding the right balance and can almost smell it. Dare I say it? AotC in April for these guys and gals? Let’s get after it!!!

Rally held an Overwatch event on one odd Saturday of March! Shout out to Grak for putting together challenges for two Guild teams to tackle against randoms. After Team Beefy Chads dominated the challenge by scoring a massive 1-0 lead against randoms, the two teams decided to smash our heads together and have an absolute We don’t need to talk about how soundly Team Alpha Assassins dominated the chads with their toxic all symmetras strat? Imagine losing to randoms tho….We’ll see you for the next one!!

Guildies Gamblin’ for Braggin’ Rights.  Knight’s has been hard at work putting together Poker tables and putting the big bluffers toe to toe.  Fun has been had by all.

PTC Memes on trash commenced with Kaz and Ariel bringing comms to a standstill as they laughed at each other laughing: https://clips.twitch.tv/ColdbloodedRoundMochaMcaT-FfKxOc8D42cJl8Iu

Raid Info – We haven’t posted an update in a while so here are a bunch of things that have happened since then!

Guild Media – Kill pics and VoDs of latest kills, in-raid memory, and so on